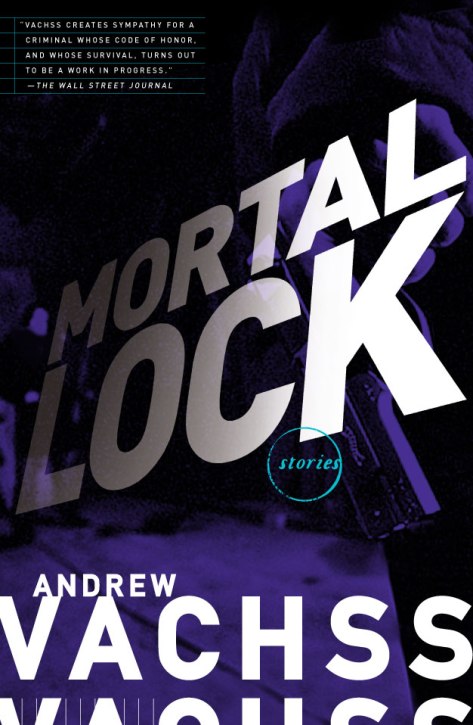 Mortal Lock (Vintage Crime/Black Lizard Original)
by Andrew Vachss
I had been meaning to read one of the many novels by Andrew Vachss but somehow never got around to actually picking one up. When I saw that this book of his short stories was going to be published in May, I thought that this would be a great opportunity to sample Mr. Vachss’ work. This was an excellent plan. In this collection of short stories, Mr. Vachss gives us a selection of tightly written glimpses into the inner workings of a very original thinker. There are 20 stories varying from just over one page to a screenplay that consumes the final third of the book. The shorter works are a timeless mix of contempory thought pieces, while the screenplay is a post apocalyptic story dealing with abuse in many forms. The writing is very focused and concise, the ideas strong and intense.
I give this book 4 Stars out of 5 and A Thumbs Up. The only thing that prevents me from giving 5 Stars is the screenplay. It takes up too much of the book and is a more difficult type of read for many people. You could skip it, but then you would be missing another insight into the workings of Mr. Vachss’ mind.
This is an excellent introduction to Mr. Vachss’ writing and will intice me to read more by this fine author.
I received this Digital Review Copy for free from Edelweiss.com.
Book Description
Release date: May 7, 2013 | Series: Vintage Crime/Black Lizard Original
A VINTAGE CRIME/BLACK LIZARD ORIGINAL
A hit man stalks his mark at a race track. A sociopath crosses every moral boundary to become a published author. An ex-mercenary obsessively defends his “perimeter” from a dangerous interloper. A man for hire grudgingly accepts help from a teenage girl to track an online predator. In a dystopian future, young people struggle for survival underground, forming themselves into vicious gangs with only the graffiti of the “last journalists” accepted as truth. Andrew Vachss collects twenty tight, powerful stories—all from the past decade of his career, including some now published for the first time—along with an original screenplay. Together, they form Mortal Lock, a searing portrait of the criminal underworld, with both its depravity and humanity on display.

About the Author
Andrew Vachss has been a federal investigator in sexually transmitted diseases, a social-services caseworker, a labor organizer, and has directed a maximum-security prison for “aggressive-violent” youth. Now a lawyer in private practice, he represents children and youth exclusively. He is the author of numerous novels, including the Burke series, three collections of short stories, and a wide variety of other material including song lyrics, graphic novels, essays, and a “children’s book for adults.” His books have been translated into twenty languages, and his work has appeared in Parade, Antaeus, Esquire, Playboy, The New York Times, and many other forums. His books have been awarded the Grand Prix de Littérature Policiére, the Falcon Award, Deutschen Krimi Preis, Die Jury des Bochumer Krimi Archivs and the Raymond Chandler Award (per Giurìa a Noir in Festival, Courmayeur, Italy). Andrew Vachss’ latest books are Mortal Lock (Vintage, May 2013) and Aftershock (Pantheon, June 2013). The dedicated Web site for Vachss and his work is vachss.com.
The book description is from Amazon. Mortal Lock (Vintage Crime/Black Lizard Original)