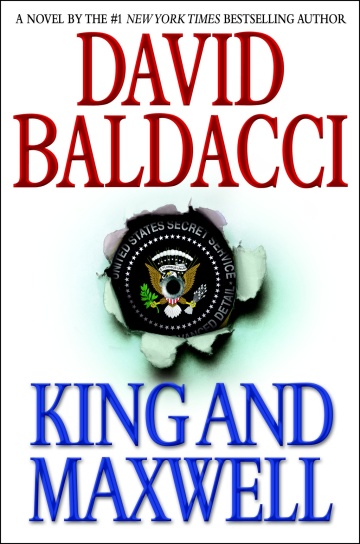 I like beef stew. David Baldacci has written a nice big pot of beef stew. Everything works nicely together, but there isn’t much spice, so it’s kind of bland. The two main characters Sean King and Michelle Maxwell have a fun interaction going on. If you’ve ever seen the American TV show, King & Maxwell, shown on the TNT network, you will recognize these characters. The storyline is a bit far-fetched, and then there is the teenage boy who is told that his dad was killed, and the teenage girl, and their side story, so this book really has the feel of a made-for-TV movie.

This is a pleasant, light, easy to read, book with plenty of action. It kept my interest. I zipped right through it. This would be a perfect beach book if it was Summer, but since it is getting cold out, I guess I would say that this is a good book to take on your Caribbean cruise. I’m sure that you can pick it up in the airport book seller on the way to catch your plane. You can read it on the deck, while sipping your tropical umbrella drink. All nice and fun. It won’t disturb your sleep with nightmares.

I give this book 3.5 Stars out of 5. Which means that it is a pleasant book, and if you like an occasional bowl of stew, I’m sure that you will enjoy this.

I received this Digital Review Copy for free from NetGalley.com.

It seems at first like a simple, tragic story. Tyler Wingo, a teenage boy, learns the awful news that his father, a soldier, was killed in action in Afghanistan. Then the extraordinary happens: Tyler receives a communication from his father . . . after his supposed death.

Tyler hires Sean and Michelle to solve the mystery surrounding his father. But their investigation quickly leads to deeper, more troubling questions. Could Tyler’s father really still be alive? What was his true mission? Could Tyler be the next target?

Sean and Michelle soon realize that they’ve stumbled on to something bigger and more treacherous than anyone could have imagined. And as their hunt for the truth leads them relentlessly to the highest levels of power and to uncovering the most clandestine of secrets, Sean and Michelle are determined to help and protect Tyler–though they may pay for it with their lives.

David Baldacci made a big splash on the literary scene with the publication of his first novel, ABSOLUTE POWER. A major motion picture adaptation followed, with Clint Eastwood as its director and star. In total, David has published 26 novels, all of which have been national and international bestsellers; several have been adapted for film and television. His novels have been translated into more than 45 languages and sold in more than 80 countries; over 110 million copies are in print worldwide. David has also published three novels for children. He has received numerous accolades for his writing: most recently, he was inducted into the 2011 International Crime Writing Hall of Fame and received the 2012 Barnes & Noble Writers for Writers Award.

A lifelong Virginian, David received his Bachelor’s degree in political science from Virginia Commonwealth University and his law degree from the University of Virginia School of Law, after which he practiced law in Washington, D.C.

While David is involved with several philanthropic organizations, his greatest efforts are dedicated to his family’s Wish You Well Foundation®. Established by David and his wife, Michelle, the Wish You Well Foundation supports family and adult literacy in the United States by fostering and promoting the development and expansion of literacy and educational programs. In 2008 the Foundation partnered with Feeding America to launch Feeding Body & Mind, a program to address the connection between literacy, poverty and hunger. Through Feeding Body & Mind, nearly 1 million new and used books have been collected and distributed via area food banks.

David lives with his wife and their two teenagers in Virginia.

The book description is from Amazon. King and Maxwell (King & Maxwell)