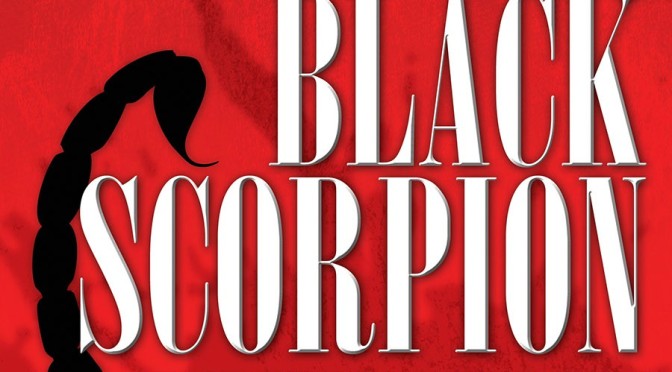 Black Scorpion is a fairly hefty book, weighing in at nearly 450 pages. It is also quite complex, with multiple points of view, featuring a large cast of characters. There are also some flashbacks, especially near the beginning of the book. So all in all, you will have to set aside a fairly good chunk of time to fully enjoy Black Scorpion. But since you won’t want to put it down, it will go quicker than you might think.

Mr. Land has a good grip on this type of storytelling. He knows how to write a complex book with multiple major characters and tie everything together in a tight, fast-paced adventure thriller. He keeps you on the edge of your seat. Even though the characters are well-developed, there is a kind of comic book feel to them. It feels like the storyline would work equally well on the pages of a Marvel or DC graphic novel, and could make a great action movie.

I enjoyed the fast-paced feel of Black Scorpion. It was a fun book to read. I was surprised how quickly time passed when I was reading it. I give it 4 stars out of 5, and A Big Thumbs Up! I recommend it to anyone who likes a fast-paced action adventure story. It will work especially well for someone who also likes the comic based movies along the lines of The Punisher, The Dark Knight, or Watchmen.

I received a copy of this book from the publisher.

The next adventure of The Seven Sins‘ Michael “The Tyrant” Tiranno, Jon Land’s Black Scorpion is a pulse pounding action-thriller as he takes on a worldwide human trafficking cabal.

Five years have passed since Michael Tiranno saved the city of Las Vegas from a terrorist attack. And now a new enemy has surfaced in Eastern Europe in the form of an all-powerful organization called Black Scorpion. Once a victim of human trafficking himself, the shadowy group’s crazed leader, Vladimir Dracu, has become the mastermind behind the scourge’s infestation on a global scale. And now he’s set his sights on Michael Tiranno for reasons birthed in a painful secret past that have scarred both men.

Already facing a myriad of problems, Michael once more must rise to the challenge of confronting an all-powerful enemy who is exploiting and ravaging innocents all across the globe and has set nothing less than all of America as its new victim. Black Scorpion has also taken the woman Michael loves hostage: Scarlett Swan, a beautiful archaeologist who was following the dangerous trail of the origins of the ancient relic that both defines and empowers Michael, a discovery that could change history and the perception of mankind’s very origins.

With the deck and the odds stacked against him, Michael must come to learn and embrace his true destiny in becoming the Tyrant reborn as a dark knight to triumph over ultimate evil and stop the sting of Black Scorpion from undermining all of the United States and plunging Las Vegas into chaos and anarchy.

A major production for a feature film is in active development in Hollywood based on the franchised character of Michael Tiranno, the Tyrant. The film will be based on the blended adaptation of Black Scorpion and its predecessor, The Seven Sins, which both have also been licensed to DC Comics for comic books and graphic novels publications worldwide.

FABRIZIO BOCCARDI is an entrepreneur, investor, creator, producer, and CEO & Chairman of the Board of Directors of King Midas World Entertainment Inc. Boccardi is the creator and owner of the multimedia brand and franchise the Tyrant. In addition, he controls numerous investments in the United States and abroad.