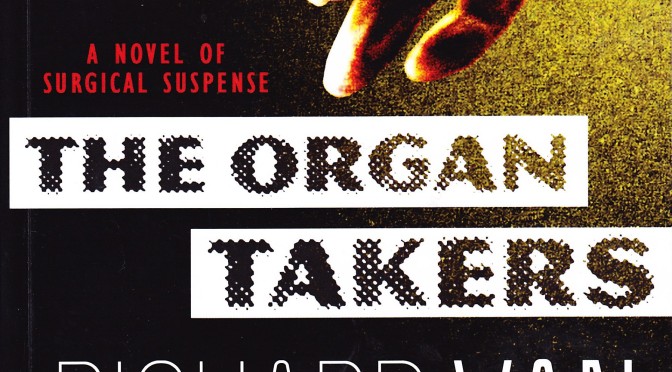 A Novel of Surgical Suspense
by Richard Van Anderson

First things first, this is book one of a trilogy. Even though there are quite a few loose ends, you don’t feel like everything has been left unresolved when you get to the end of the book. I like some sort of closure in a first book of a series. If I don’t get that, I just am kind of put off. The Organ Takers was interesting enough that I will read the next volume when it becomes available.

Dr. Anderson is a former heart surgeon and it shows in this novel. The surgical procedures are extremely detailed. He probably goes a bit overboard on the minutia, but that is his background, so I’m sure that it is accurate, and that is what feels right to him. Most readers will be skimming though some of it. He does a good job with his first novel.

The main plot-line of the novel is realistic and believable.  The basic idea, that there is a black market for stolen organs is a scary proposition, but rings true. Some of the sub-plots and character’s thought processes are a little far-fetched, but not inconceivable. The action drives the story and keeps you reading. You will finish The Organ Takers very quickly, because it is easy to get into and the prose is quite straight forward, and you won’t want to stop reading it.  Characterization was a little shallow, but that is what you expect in an action driven thriller.

All in all, The Organ Takers was an exciting, and engaging book one of a trilogy. The author draws you into the story, and when you finish it, you will be anticipating book two. I enjoyed it, but wish that I had known going in that The Organ Takers was the first book in a trilogy. It doesn’t say that anywhere on the book, or on the Amazon page, except in  the reviews. I think that the publisher needs to correct that. Some people don’t want to read a trilogy, and they should know up front what they are getting into.

Ignoring the trilogy issue, I thought that The Organ Takers was a good debut novel, and will try to read the next book. I give it 4 Stars out of 5, and recommend it to fans of Robin Cook, especially since there doesn’t seem to be many good medical thrillers out there lately.

I received a review copy from the publisher, White Light Press.

Set primarily in lower Manhattan, THE ORGAN TAKERS opens with former surgery resident Dr. David McBride in exile from the surgical community. While under the mentorship of transplant surgeon and biomedical researcher Dr. Andrew Turnbull, McBride was coerced into manipulating the liver transplant waiting list, then failed to bring such an egregious violation of moral and ethical standards to the attention of his superiors. Both men were eventually discovered, subsequently fired, and lost their licenses to practice medicine. Turnbull moved his lab to rural New Jersey, while McBride settled for operating on rats in a surgical research laboratory at an uptown university medical center.

Down but not out, McBride never gives up on his dream, and after applying to nearly every surgical residency in the country, he is rewarded with a second chance to complete his training and pursue a career in surgery. But, as David stands on the threshold of a new life, the malignant underside of his fellow man intervenes. Under the threat of violence to himself and his pregnant wife, David is forced to perform illegal organ harvests, in a makeshift operating room, hidden within a dilapidated meatpacking warehouse. Interfacing with a spook known only as Mr. White, McBride is unaware that Andrew Turnbull is behind his recruitment as black market organ harvester.

Unable to resolve the excruciating moral dilemma faced each time he invades the body of an unwilling victim, David fights to free himself from the situation and finds himself increasingly isolated as the dangers mount. As NYPD detective Kate D’Angelo closes the net around him, and the organ-snatching conspiracy takes his wife hostage, McBride must find help, and he turns to a most unlikely source: a drug dealer whose life David had saved while still a surgery resident.

THE ORGAN TAKERS is an exhilarating medical thriller that has both the good guys and the bad balancing precariously on the edge of good and evil. The story not only entertains, but ventures below the surface to explore how men of intelligence, drive, and compassion sometimes choose, or are forced, to venture down dark paths.

I’m a former heart surgeon turned fiction writer. I write what can be described as medical mysteries, medical thrillers or novels of medical suspense, but I prefer to think of them as novels of surgical suspense.

What is surgical suspense? Surgeons, surgical diseases and the operating room are inherently dramatic. As a former surgeon, I’ve experienced this drama first hand and thought it would make for good fiction. My surgery training took me from the “knife and gun club” of LSU Medical Center in Shreveport, Louisiana, to the famed Bellevue Hospital in Midtown Manhattan. My education as a writer includes an MFA in creative writing where I was mentored by New York Times bestselling author Dennis Lehane, among other accomplished faculty.

I know a lot about medicine and surgery, I know a lot about writing and storytelling, and I believe that combining this vast and unusual right-brain/left-brain experience will make for interesting reading and discussion, so please visit often.