Footsteps in the Sky

This was an interesting, but kind of schizophrenic sort of book. First it is a book telling the story of a conflict between the Traditional Hopi living up in the high mesas and the Modern Hopi living in the lowlands near the coasts. It’s a conflict between a Native American group who wants to continue with the Old Ways. They hold on to their gods and old stories. They believe that the way to succeed is to only embrace the tools and technologies that they understand and can fix. The city dwellers want to have every new thing, even if they can’t keep the devices going on their own. Sounds like a pretty normal story from the plains of the American South West, doesn’t it. But this story takes place on a far distant planet in another solar system. These groups were settled on this world to terraform it. Their job is to make it livable for the general population.

The other monkey wrench is that this planet had already been changed. Another alien group of planet changers had started adjusting the world to their needs. They had used robotic ships to start the process many thousand of years ago. The ships have returned and discovered that there were humans on their world. But these robots have become damaged, and may even be insane. They may need to sterilize this world and start over.

Mr. Keyes uses multiple Points of View to tell this story. He jumps back and forth between the different groups and different individuals in those groups. You might be seeing something though one of the alien’s eyes, then jump to a human ship traveling from earth, then down to the different people on the surface of the planet. It’s a lot to keep track of, but it is possible.

I had fun reading Footsteps in the Sky. It wasn’t great, but it certainly was different. I give it 3 1/2 Stars out of 5. If you like a quirky sort of hard Science Fiction, you should check this out, just remember that this book was the author’s first novel, written in 1994. It has that first book feel. 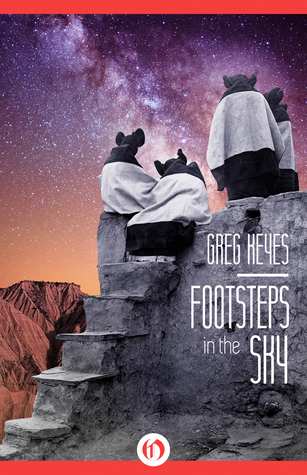 The pueblo people who landed on the Fifth World found it Earthlike, empty, and ready for colonization . . . but a century later, they are about to meet the planet’s owners

One hundred years ago, Sand’s ancestors made the long, one-way trip to the Fifth World, ready to work ceaselessly to terraform the planet. Descendants of native peoples like the Hopi and Zuni, they wanted to return to the way of life of their forebears, who honored the Kachina spirits.

Now, though, many of the planet’s inhabitants have begun to resent their grandparents’ decision to strand them in this harsh and forbidding place, and some have turned away from the customs of the Well-Behaved People. Sand has her doubts, but she longs to believe that the Kachina live on beyond the stars and have been readying a new domain for her people.

She may be right. Humans have discovered nine habitable worlds, all with life that shares a genetic code entirely alien to any on Earth. Someone has been seeding planets, bringing life to them. But no other sign of the ancient farmers has ever been discovered—until one day they return to the Fifth World. They do not like what they find.

Originally written in 1994, Footsteps in the Sky is finally being released in digital form by Open Road Media.

Greg Keyes was born in 1963 in Meridian, Mississippi. When his father took a job on the Navajo reservation in Arizona, Keyes was exposed at an early age to the cultures and stories of the Native Southwest, which would continue to influence him for years to come. He earned a bachelor’s degree in anthropology from Mississippi State University and a master’s degree from the University of Georgia. While pursuing a PhD at UGA, he wrote several novels, including The Waterborn and its sequel, The Blackgod. He followed these with the Age of Unreason books, the epic fantasy series Kingdoms of Thorn and Bone, and tie-in novels for numerous franchises, including Star Wars, Babylon 5, the Elder Scrolls, and Planet of the Apes. Keyes lives and works in Savannah, Georgia, with his wife, Nell; son, Archer; and daughter, Nellah.