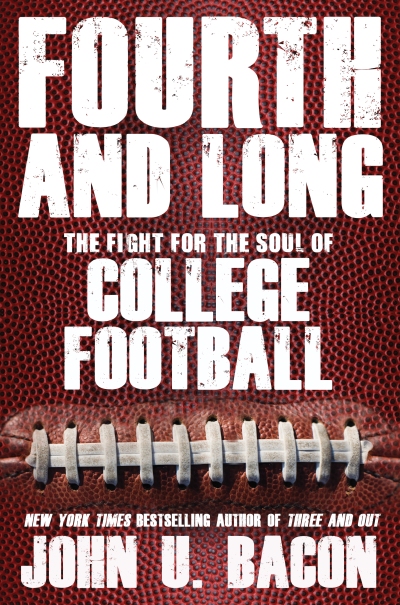 Fourth and Long: The Fight for the Soul of College Football

by John U. Bacon

I enjoyed reading this book, but I live in Michigan and went to Michigan State in the late 60s, so I am a fan of college football, classic Big Ten style. If you aren’t a Big Ten fan, much of this book will probably annoy you. The main focus is from early 2012 through the end of the regular season 2012. Mr. Bacon follows four Big Ten teams, Michigan, Northwestern, Ohio State, and Penn State. He gets you inside of the troubled Penn State locker room after the NCAA tried to destroy their football program. He also gets you inside information on each of the other programs.

Then Mr. Bacon takes you through the season, with emphasis on the fan experience as he travels around the league and goes to the games as a fan. This run though of the season is a lot of fun and gets you fired up for the 2013 season.

He argues that the major college football programs are being run by CEO type administrators, not for the benefit of the fans, the players, or the students, but instead, he proposes, that they are just trying to maximize income, and therefore profits, to increase their own stature in the community of sports administrators. He questions if fans will keep paying the ever-increasing costs of going to games, if they will put up with all of the demands that TV puts on the live football experience, and if they can stomach the ever-changing college conference lineups. He asks if the rivalries between teams aren’t more important than needless proliferation of post season bowl games.

I give this book 4 stars out of 5 and a Thumbs Up. Any diehard college football fan will enjoy this book, and the arguments that Mr. Bacon makes will be a cause for concern for the future. If you hate the Big Ten, don’t bother with this, because that is the main emphasis of the book.

Why we love the game, what is at risk, and the fight to save it.

In search of the sport’s old ideals amid the roaring flood of hypocrisy and greed, bestselling author John U. Bacon embedded himself in four programs—Penn State, Ohio State, Michigan, and Northwestern—and captured college football’s oldest, biggest, most storied league, the Big Ten, at its tipping point. He sat in as coaches dissected game film, he ate dinner at training tables, and he listened in locker rooms. He talked with tailgating fans and college presidents, and he spent months in the company of the gifted young athletes who play the game.

None of Bacon’s discoveries is more poignant than this: the last, true defenders of the student-athlete ideal are the players themselves, who, even as money changes everything around them, are left to carry the future of the league, the game, and more than a century of tradition on their backs every fall Saturday.

Fourth and Long reveals intimate scenes behind closed doors, from a team’s angry face-off with their athletic director to a defensive lineman acing his master’s exams in theoretical math. It captures the private moment when coach Urban Meyer earned the devotion of Ohio State’s Buckeyes on their way to a perfect season. It shows Michigan’s athletic department endangering the very traditions that distinguish the college game from all others. And it recreates the euphoria of the Northwestern Wildcats winning their first bowl game in decades, even as they do honor to the student-athlete ideal.

Most unforgettably, Fourth and Long finds what the national media missed in the ugly aftermath of Penn State’s tragic scandal: the unheralded story of players who joined forces with Coach Bill O’Brien to save the university’s treasured program—and with it, a piece of the game’s soul.

This is the work of a writer in love with an old game—a game he sees at the precipice. Bacon’s deep knowledge of sports history and his sensitivity to the tribal subcultures of the college game power this elegy to a beloved and endangered American institution.

John U. Bacon has worked the better part of two decades as a writer, a public speaker, and a college instructor, winning awards for all three.

He is the author or coauthor of six books on sports and business, including “Bo’s Lasting Lessons: The Legendary Coach Teaches the Timeless Fundamentals of Leadership” (2007), which became a New York Times and Wall Street Journal business bestseller, and “Three and Out: Rich Rodriguez and the Michigan Wolverines in the Crucible of College Football” (2011), which debuted at #6 on the New York Times Bestseller list.

Bacon has been sought out to give speeches for financial companies such as Merrill Lynch and Ameriprise, auto manufacturers like Chrysler and Subaru, and international corporations like Microsoft Brazil and Copersucar, from Taipei to Toledo, and Seattle to Sao Palo. In 2011 the Michigan chapter of Meeting Planners International (MPI) named him Speaker of the Year. He also teaches at Northwesterns’ Medill School of Journalism, and the University of Michigan, where he won the Golden Apple Award in 2009. in 2006, he was inducted into the Ann Arbor Huron High School Hall of Fame for helping to lead the hockey team from the worst in school history to the best in three seasons.

Bacon is a decent hockey player, a mediocre Spanish speaker and a poor piano player, but that has not prevented him from enjoying all three.

The book description is from Amazon. Fourth and Long: The Fight for the Soul of College Football