No Cure for Love: A Novel

This book was first published in 1995, and is set during that time, so in many was this is sort of a period police procedural. The tech is 25 years old, but that’s OK. The detectives can’t check the traffic cams or try to find someone using their cellphone’s GPS chip, they have to use old-fashioned police work. California has changed a lot in 25 years too, but nothing feels too dated.

Most of us know Peter Robinson as the author of the Inspector Banks series, which are set in northern England, near Yorkshire. The southern California location of No Cure for Love is quite a change for Mr. Robinson, but he pulls it off quite well. It never feels artificial. He gets it right, but he does keep some of his Britishness in his writing. He tones down the gore, and keeps the characters more civilized. His main character, Sarah Broughton, is a British actress  and the lead detective, Arvo Hughes,  isn’t a California native. He grew up in the Detroit area and only had been in LA three years. The minor characters have an LA feel to them, but they really aren’t very developed.

Since this is a stalker type story, it has many things that you have seen before. There are a series of letters written by the stalker. Some of the chapters are the first person thoughts of the stalker. The stalker wants to impress Sarah, so he sets up a scene near her house. That sort of stuff. There are a few twists, but this isn’t a Jeffery Deaver book, by any means.

This was an easy book to read. I enjoyed it. I liked Sarah and Arvo. It could have been a decent start to a series, but was probably more of an experiment for Mr. Robinson. He was sticking his toe into the American book market. It probably didn’t sell well enough to warrant continuing. After all he had DCI Banks. He had published his seventh Banks book in 1994 and No Cure for Love was just a diversion.

I give No Cure for Love 4 Stars out of 5, and a Thumbs Up. If you feel like a mild psychological thriller set in sunny LA, give it a try. This won’t give you nightmares. 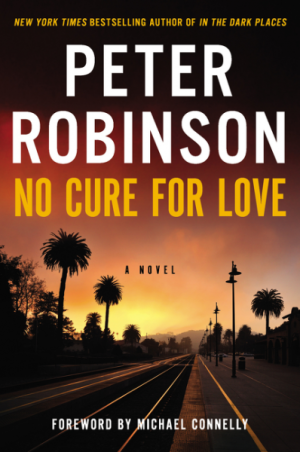 Originally published in 1995, No Cure for Love is being reissued this year, with an introduction by Michael Connelly. This relentlessly suspenseful thriller from the New York Timesbestselling and Edgar award-winning author of the Inspector Banks novels marks the first time that Peter Robinson has set a novel in America.

Sarah Broughton has come a long way. She’s the star of a hit cop show on TV. She lives in a beautiful California beach house. And—most importantly—she’s put her dark past behind her… as well as her old name, Sally Bolton. No need for anyone to know about that.

When Sarah begins receiving letters mysteriously signed with the letter “M,” she thinks they’re from a harmless admirer… until her real name appears in the third letter. And then she finds that name inscribed in the sand near her home – next to a body.

The message is clear: Someone is watching Sarah’s every move. Someone so obsessed with her that he won’t stop at just one murder in order to prove his love.

Panicked, Sarah turns to Detective Arvo Hughes of the LAPD, a man who specializes in hunting down the most dangerous stalkers. But nothing in Hughes’ experience has prepared him for the mastermind he’s up against. For the killer, there’s no cure for love. And for Sarah and Hughes, there’s no way out.

Peter Robinson is the bestselling author of the Inspector Banks series, two short-story collections, and three standalone novels, which combined have sold more than ten million copies worldwide. Among his many honors and prizes are the Edgar Award, the CWA (UK) Dagger in the Library Award, and Sweden’s Martin Beck Award.