Yesterday afternoon I received a TON of spam emails. It filled my mailbox. So I am extending the contest for TWO days. If you tried to enter the contest, please enter again so that your entry will be included.

The contest will end October 8th at 11PM EDT! 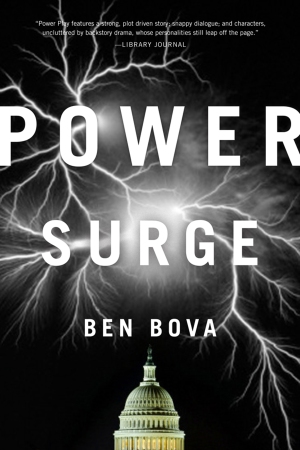 TOR/FORGE Books would like to invite you to enter a contest to win a copy of POWER SURGE, a new political thriller at the forefront of science and technology written by six-time Hugo Award-winning author Ben Bova. As the 2016 elections rapidly approach and the debate over sustainable energy continues to heat up, this new fiction presents an all-too-real political landscape that I think would really intrigue you. Booklist says “those with both a passion for climate science and the politics surrounding it will find POWER SURGE meticulously fashioned out of all their hopes and fears.”; details about the book are below.

UPDATE Oct 1st. If I get 20 more entries, I will send someone the copy that the publisher sent me.

Here’s how you can enter for a chance to win:

Send an email to contest at mackela dot com.
In the subject line, enter “Power Surge“

In the body of the email, please provide a mailing address (no P.O. Boxes) so the prize can be sent as soon as possible. (The winning address is used only to mail the prize. All other address info will be purged once the giveaway ends.)

Geographic restrictions: This giveaway is open only to residents of the U.S. and Canada.

The giveaway will end Tuesday October 8th (11:00 PM U.S. Eastern Daylight time). The TWO Lucky winners will be selected at random. Winners will be announced here on Oct 9th. I will also send an email to the lucky winners.

POWER SURGE (ISBN 978-0-7653-3497-8; $24.99; August 11, 2015) follows Dr. Jack Ross, the science advisor to a freshman senator in Washington, D.C. He’s introduced a comprehensive energy plan employing cutting-edge technology that would not only establish America as the world leader in energy production, but boost the economy and protect the environment. Yet, despite being an expert in facts and data, he isn’t quite up to speed on the workings of Washington, and his plan is dismissed by well-funded lobbyists, cynical bureaucrats, pork-barrel politicians, and one very powerful U.S. Senator. Ross won’t accept defeat that easily, and becomes more resolved to implement his plan of action – even if it kills him.

Ben Bova is the author of more than a hundred works of science fact and fiction, including Able One, Leviathans of Jupiter and the Grand Tour novels, including Titan, winner of John W. Campbell Memorial Award for best novel of the year. He received the Lifetime Achievement Award of the Arthur C. Clarke Foundation in 2005, and in 2008 he won the Robert A. Heinlein Award “for his outstanding body of work in the field of literature.” He is President Emeritus of the National Space Society and a past president of Science Fiction Writers of America, and a former editor of Analog and former fiction editor of Omni. As an editor, he won science fiction’s Hugo Award six times. Dr. Bova’s writings have predicted the Space Race of the 1960s, virtual reality, human cloning, the Strategic Defense Initiative (Star Wars), electronic book publishing, and much more. He lives in Florida.

One thought on “#Giveaway for #PowerSurge by #BenBova extended until Oct. 8th!”