(Limited to readers who live in the U.S. and Canada) 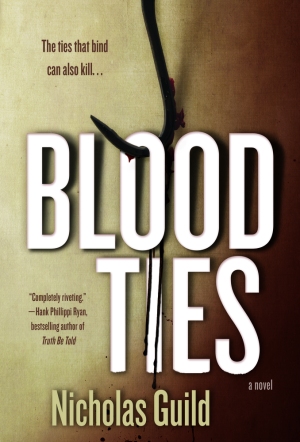 I’m happy that three of my readers have a chance to win a copy of NICHOLAS GUILD’s engrossing novel BLOOD TIES (A Forge Hardcover; $25.99; On-sale May 12, 2015)! Guild books have been published from Japan to Russia and several have been international bestsellers.  He has written thrillers, historical novels and, most recently, a ghost story.  Early in his career he was recognized as a writer of abundant grace, power and technical agility.  Publishers Weekly described him as “a master of timing, plot and style.” Now FORGE Books will publish his highly anticipated novel, BLOOD TIES. A mystery/thriller set in the San Francisco Bay Area mixed with secret government alliance, hackers, code breakers and a relentless serial killer. BLOOD TIES captures readers pulling them into an ethical landscape in which the line between right and wrong blurs.