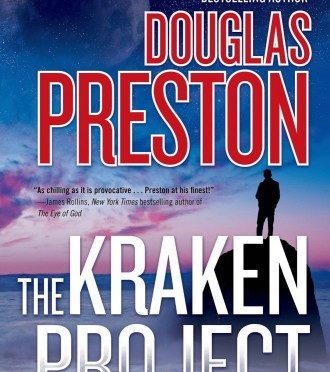 The Kraken Project
by Douglas Preston

This book will grab you, and hold you hostage until the last page. You will finish it much faster than you thought you would, because you won’t want to put it down. If you start it tonight, better make sure that you don’t have to go to work tomorrow, because you may be up all night.

I have read most of the Pendergast series written by Douglas Preston and Lincoln Child, but I don’t think that I have read any solo works by either of them. This felt like it could have been a standalone book, not part of a series. The story didn’t rely on any previous knowledge of Wyman Ford, but i liked it so much that I have put the previous books in the series on my “Books to Read” list. The more books I read, the longer it gets. How does that happen?

The Kraken Project is an exciting techno-thriller. It takes place in the near future, so there is a small increase in the state of technology, and a corresponding small amount of “suspension of disbelief”. Once you accept that a computer program could jump out of a computer, and actually act independently, traveling across the internet, and then find other devices that it could hide in, you are home free. This allows you to accept that Dorothy can become a complete character, and not just lines of code inside of a memory chip. Mr. Preston uses Melissa Shepherd to create Dorothy, a believable “Strong A.I. (Artificial Intelligence)” program. She is every bit as much of a human character as anyone else in this book, and you connect with her, and care about what happens to her. Shepherd and Ford work together to try to save Dorothy.

The story is exciting, and fast paced. There are a few separate story lines that all come together at the end in an explosive climax. It is an enjoyable thriller, with a message. It feels like there could be more coming soon.

I give this book 4 1/2 Stars out of 5, and a Big Thumbs Up! If you are ready for a straight forward story, that you won’t want to put down, this book will fill that need.

I received a copy of this book for free from Forge Books.

NASA is building a probe to be splashed down in the Kraken Mare, the largest sea on Saturn’s great moon, Titan. It is one of the most promising habitats for extraterrestrial life in the solar system, but the surface is unpredictable and dangerous, requiring the probe to contain artificial intelligence software. To this end, Melissa Shepherd, a brilliant programmer, has developed “Dorothy,” a powerful, self-modifying AI whose true potential is both revolutionary and terrifying. When miscalculations lead to a catastrophe during testing, Dorothy flees into the internet.

Former CIA agent Wyman Ford is tapped to track down the rogue AI. As Ford and Shepherd search for Dorothy, they realize that her horrific experiences in the wasteland of the Internet have changed her in ways they can barely imagine. And they’re not the only ones looking for the wayward software: the AI is also being pursued by a pair of Wall Street traders, who want to capture her code and turn her into a high-speed trading bot.

Traumatized, angry, and relentlessly hunted, Dorothy has an extraordinary revelation—and devises a plan. As the pursuit of Dorothy converges on a deserted house on the coast of Northern California, Ford must face the ultimate question: is rescuing Dorothy the right thing? Is the AI bent on saving the world… or on wiping out the cancer that is humankind?

DOUGLAS PRESTON is the author of The Monster of Florence, currently being developed as a film starring George Clooney as Preston himself, and the New York Times bestsellers Impact, Tyrannosaur Canyon, and Blasphemy. He is the co-author, with Lincoln Child, of the famed Pendergast series of novels, including such bestselling titles as The Book of the Dead and The Wheel of Darkness, as well as The Relic, which was made into a number one box office hit movie.

The book description is from Amazon.  The Kraken Project (Wyman Ford)