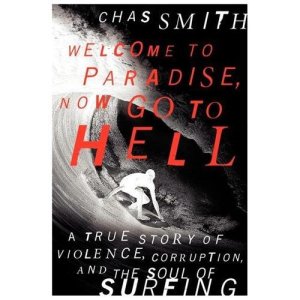 Welcome to Paradise, Now Go to Hell: A True Story of Violence, Corruption, and the Soul of Surfing

Chas Smith is a real piece of work. He is very full of himself. He thinks that his style is the only style that anyone should wear. He is truly the hippest man on the planet (in his own mind, anyway). You will probably be really annoyed with him. You might even hate him, but he wrote a good book.

This book is supposed to be about surfing, but really most of the time Chas Smith is talking about Chas Smith. He really likes himself. This can get under your skin, because you won’t like him nearly as much as Chas Smith likes himself.

Once you get past screaming at Chas for the stupid stuff he is saying and settle down and get your blood pressure under control, (this took me about a third of the book) you get to learn some very eye-opening things about what goes on during the Winter on Oahu’s North Shore. This is when the biggest, scariest, most sought after, waves are pounding the shores of Hawaii. This is when the biggest surf contest of the year takes place, The Van’s Triple Crown of Surfing. The biggest event takes place at the Banzai Pipeline. The heart of this book happens during the 2012 Billabong Pipe Masters. Chas Smith talks to the two scariest men on the North Shore. He writes stuff that they may not want to have released out into the wild. I wonder what will happen to Chas Smith once this book is published. I am following him on Twitter (@chasdoesntsurf ) to see what he posts after November 19.

I give this book 4 Stars out of 5. If you are going to Hawaii this December to watch the Pipe Masters surfing contest at Pipeline, you need to get this book. It will give you some good inside information, and some safety tips.

For two months every winter, when Pacific storms make landfall, swarms of mainlanders, Brazilians, Australians, and Europeans flock to Oahu’s paradisiacal North Shore in pursuit of some of the greatest waves on earth for surfing’s Triple Crown competition. Chas Smith reveals how this influx transforms a sleepy, laid-back strip of coast into a lawless, violent, drug-addled, and adrenaline-soaked mecca.

Smith captures this exciting and dangerous place where locals, outsiders, the surf industry, and criminal elements clash in a fascinating look at class, race, power, money, and crime, set within one of the most beautiful places on earth. The result is a breathtaking blend of crime and adventure that captures the allure and wickedness of this idyllic golden world.

Hyper-ironic surf journalist and bon vivant from Coos Bay, Oregon; frequent contributor to Stab magazine and a contributing editor at Surfing magazine since the mid-2000s. Born (1976) in San Jose, California, Smith moved to Oregon with his family two years later where, at age 10, he started surfing in the chilly waters in and around Coos Bay. He earned a bachelor’s degree in intercultural studies (1998) and a master’s degree in linguistics (2001) from Southern California’s Biola University; Smith’s studies included semesters spent studying Arabic in Egypt and English at Oxford University.

Smith’s first foray into surf journalism came in 2001, when he traveled to Yemen—just after the 9/11 attack—for an Australia’s Surfing Life article. Comfortable in dangerous Third World nations, Smith spent time in Lebanon and Somalia in the early 2000s researching and writing pieces for Vice, an arts and culture magazine. He also covered the 2006 Israeli-Hezbollah conflict for the internet-based CurrentTV, an assignment that ended with Smith as a brief captive of Hezbollah.

Smith’s work for Vice caught the eye of Derek Rielly, editor-in-chief at Australia’s Stab magazine, who soon hired him as a contributing writer. Smith’s prose is clipped, packaged in rapid-fire bursts, usually in first-person perspective, always with a tongue-in-cheek earnestness. At Stab, Smith quickly earned a following for his flippant wicked-smart observations of the more urbane pro tour party scene. He loved provocation, and drew attention and a bit of ire as the editor of Stab’s December, 2008 “Fascism Issue.” He gained further notoriety in 2009 for an ugly public dust-up with two-time world champion Mick Fanning, during which Fanning reportedly called Smith a “fucking Jew” for “writing shit” about him, and threatened to punch Smith in the face.

Smith’s work at Surfing is generally more subdued than what he’d done for Stab, though still with a critical spotlight pointed straight at surf culture, particularly in his regular “Baby, Take it Off!” column. In 2012, Smith also began publishing articles in Surfer’s Journal; the following year he had his first feature published in Playboy.

Smith’s first book, Welcome to Paradise, Now Go to Hell, a surf-based cultural peek at the North Shore of Oahu, is due out in late 2013.

About the Author from Encyclopedia of Surfing by Matt Warshaw. Smith, Chas

The book description is from Amazon.  Welcome to Paradise, Now Go to Hell: A True Story of Violence, Corruption, and the Soul of Surfing

One thought on “A review of Welcome to Paradise, Now Go to Hell by Chas Smith”