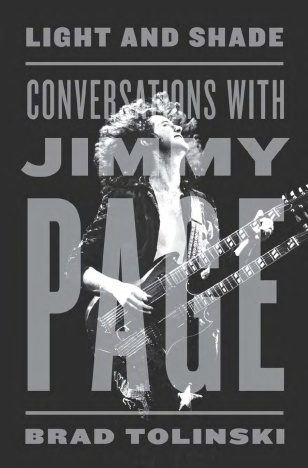 This book is a joy to read for anyone that enjoys rock guitar whether as a player or a listener. A must read! This book goes way beyond anything that has been written about the reclusive Jimmy Page.

Brad Tolinski was able to get close to Jimmy Page and got him to talk about his music. This book has all the details that any musician or music lover could wish for. Page talks to Tolinski about guitars, tunings, chords, and amps. They talk about how Page was able to get a specific sound on an individual song. They discus the interplay between Bonham’s drums, Jones’ Bass, Page’s guitar, and Plant’s vocals and how they were able to all come to agreement on the roles that each would play in Led Zeppelin.

The book covers the time when page was a studio musician, before Led Zeppelin was formed, up to what Page is doing in 2012. The conversations with Page are interspersed with interviews with other musicians who have worked with Page, such as Jeff Beck, Chris Dreja, John Paul Jones, Jack White, and Paul Rogers.

I was given an e-book version of Light and Shade for review purposes by Crown Publications and Net Galley.

The “oral autobiography” of Jimmy Page, the intensely private, interview-averse lead guitarist and mastermind behind Led Zeppelin–one of the most enduring bands in rock history–and the most complete, in-his-own-words portrait of the guitarist ever published.

More than 30 years after disbanding in 1980, Led Zeppelin continues to be celebrated for its artistic achievements, broad musical influence, and commercial success. The band’s notorious exploits have been chronicled in bestselling books such as Stephen Davis’s Hammer of the Gods. Yet none of the individual members of the band has penned a memoir nor cooperated to any degree with the press or a biographer. Iconic guitarist and Led Zeppelin founder, Jimmy Page, is both the band’s most reticent member and the one who most fascinates Zep’s huge fan base. For the first time and in his own words, he opens up to journalist Brad Tolinski, exploring in-depth his remarkable life and musical journey.

Brad Tolinski has been the editor-in-chief of Guitar World, the world’s best-selling magazine for musicians, for more than two decades. He has interviewed and profiled most of popular music’s greatest guitarists, including Eric Clapton, B.B. King, Eddie Van Halen, Jack White and Jeff Beck. He is also the author of the deluxe-edition illustrated books Classic Hendrix: The Ultimate Hendrix Experience and The Faces: 1969–75.